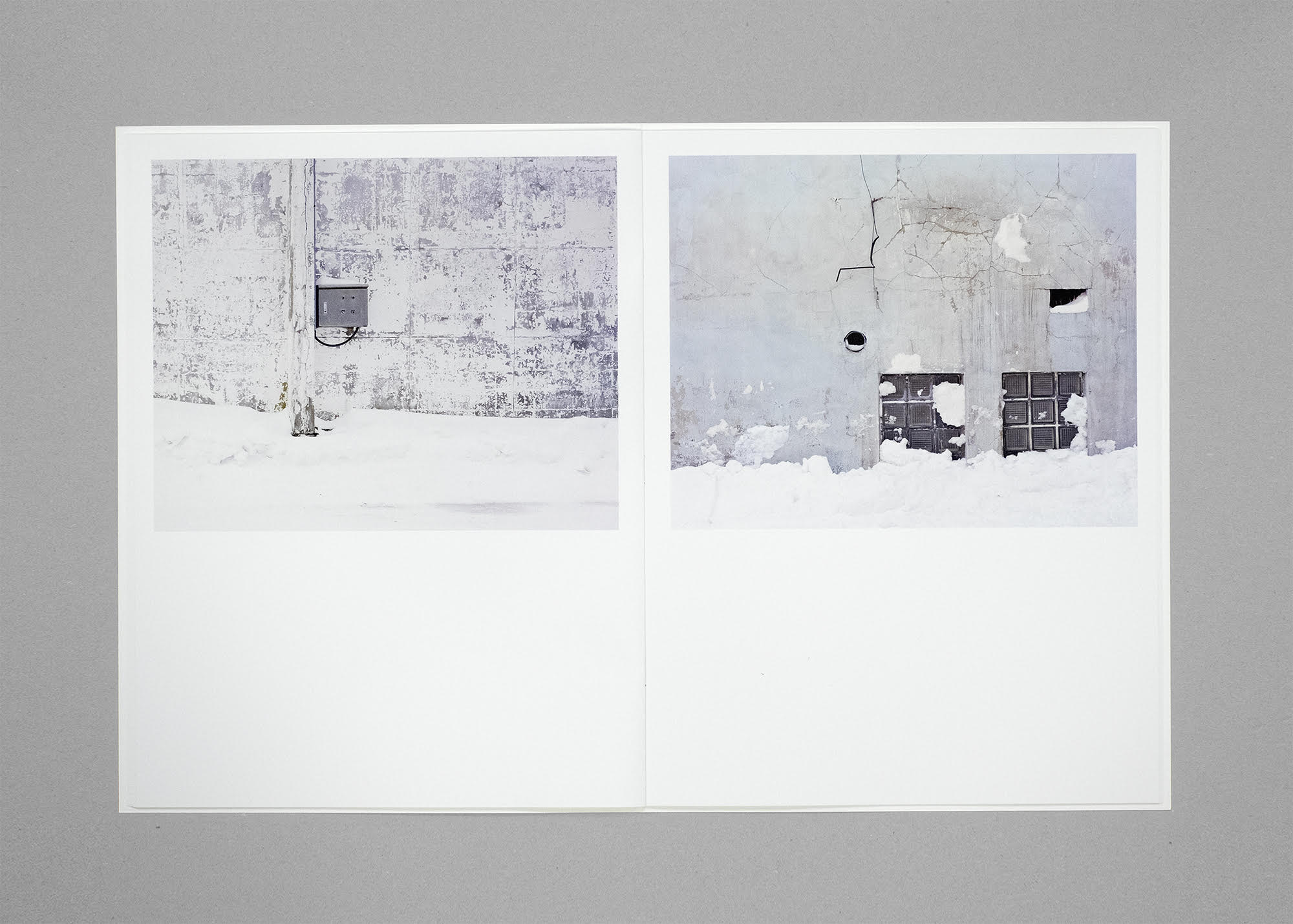 Words by Angus Scott with imagery by Rohan Hutchinson

Rohan Hutchinson’s The North Eastern Estates utilises 20 buildings as surveying points, making record of the interaction between human habitation and climate in the Japanese winter environment.

On first glance these buildings feel somewhat anonymous, each obscured from their surroundings as if to remove any extra layers of context. Blending into one another in a way that opposes their stark positioning within the snow-covered landscape. Over time though, these small details begin to contribute towards individual personalities. A small twig here, a slither of an obscured window there. Each minute discovery a new anchoring point, separating each structure from the next whilst rooting them firmly within their place. 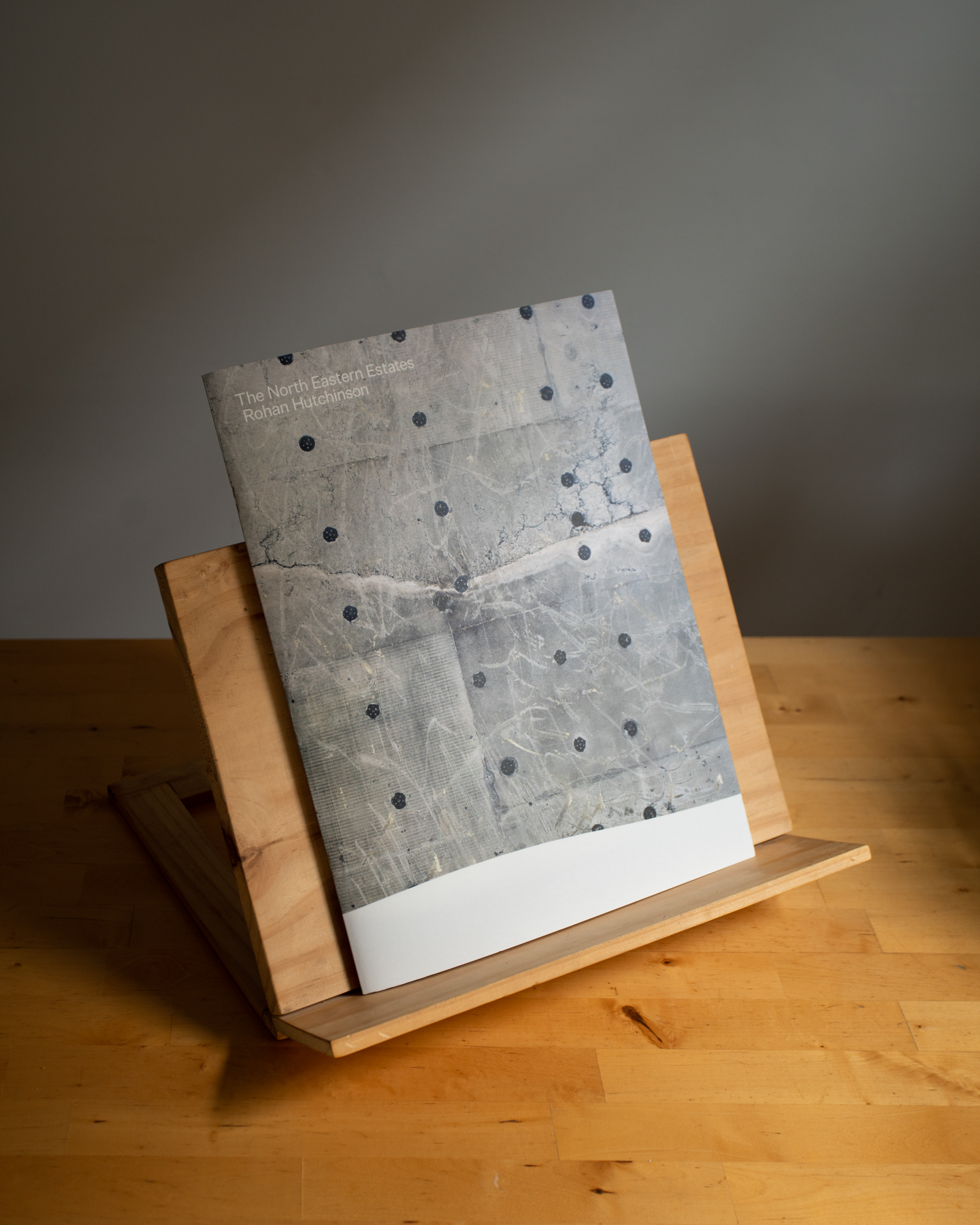 To start off, this is a large book, overshadowing our small drafting stand by a good 20%. Rohan refers to this as ‘XL’ and he’s not wrong. The cover image can be viewed in full by opening the book entirely and holding it away from you. Placed against the sun, the small black circles have an almost reflective quality, illuminating the impeccably held matte white of the snow below and textured grey of their surrounding. Scratches, or lines caused by some form of damage seem to stretch up the wall, as high as the composition will allow us to see. 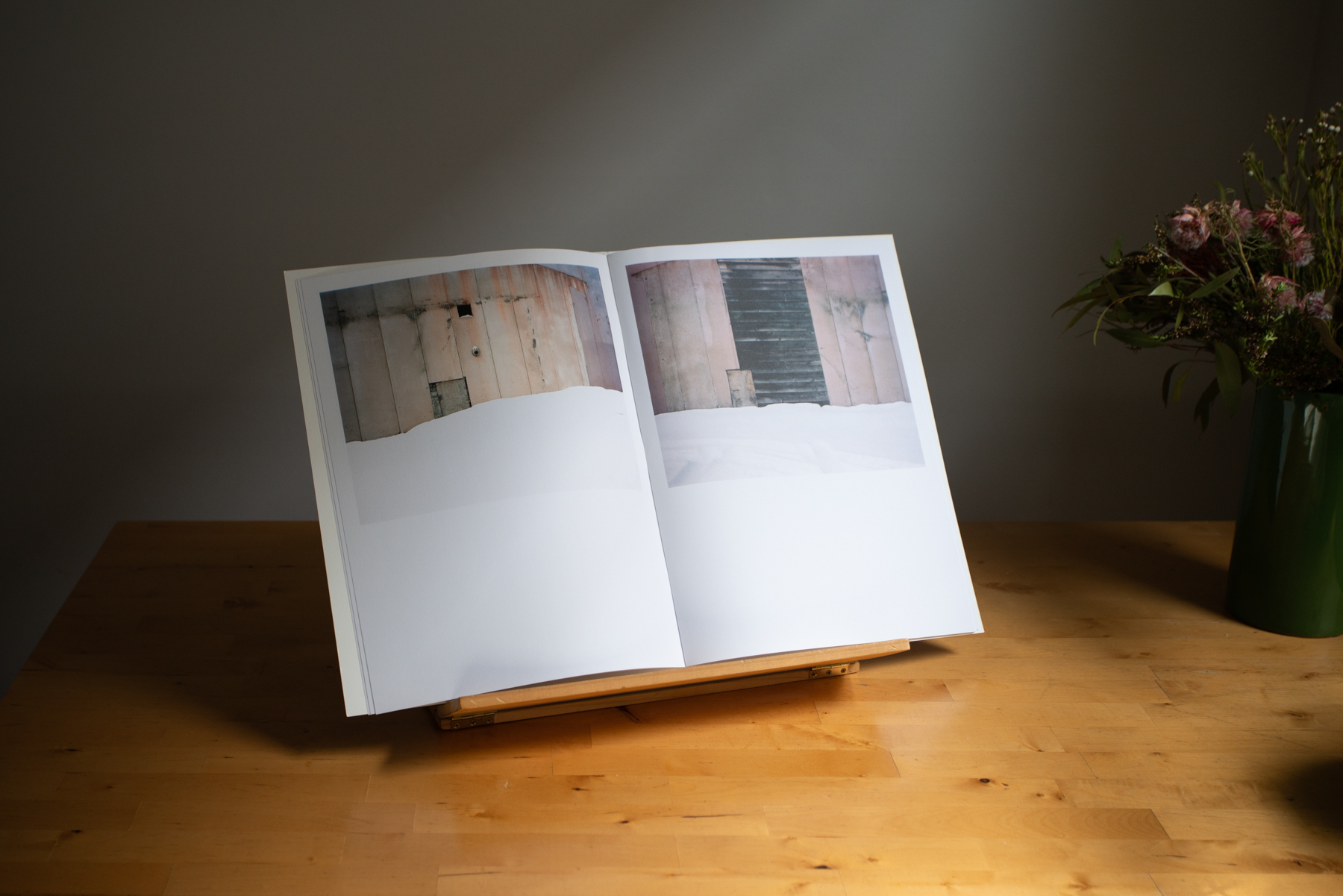 The statement on the back cover reads;

The North Eastern Estates studies how geographic location alters the built environment. Photographed over three winters within Hokkaido, Japan, 2010-12, the work researches constraints in building parameters and how these alter the aesthetics and longevity of permanent structures placed into the environment. The completed series demonstrates the annual transformation of the industrial, residential, and rural built communities.

This transformative process through season is particularly striking to me. As the snow level is clearly building on the ground, I’m taken back to those scratches so high in the frame of the cover photograph. It feels reminiscent of a riverbank after floodwaters have receded, as though the tide of snow has meters yet to rise. Ominous in its promising of the seasons delivery.

The first image in the book, titled Otaru #2, continues this sense of build-up. The discolouration leading halfway up the wall seemingly indicative of more to come. The vertical join appearing as though it is somehow oozing under the pressure. It feels isolating, watching as these structures become slowly engulfed. The proverbial wall of climate, closing in. 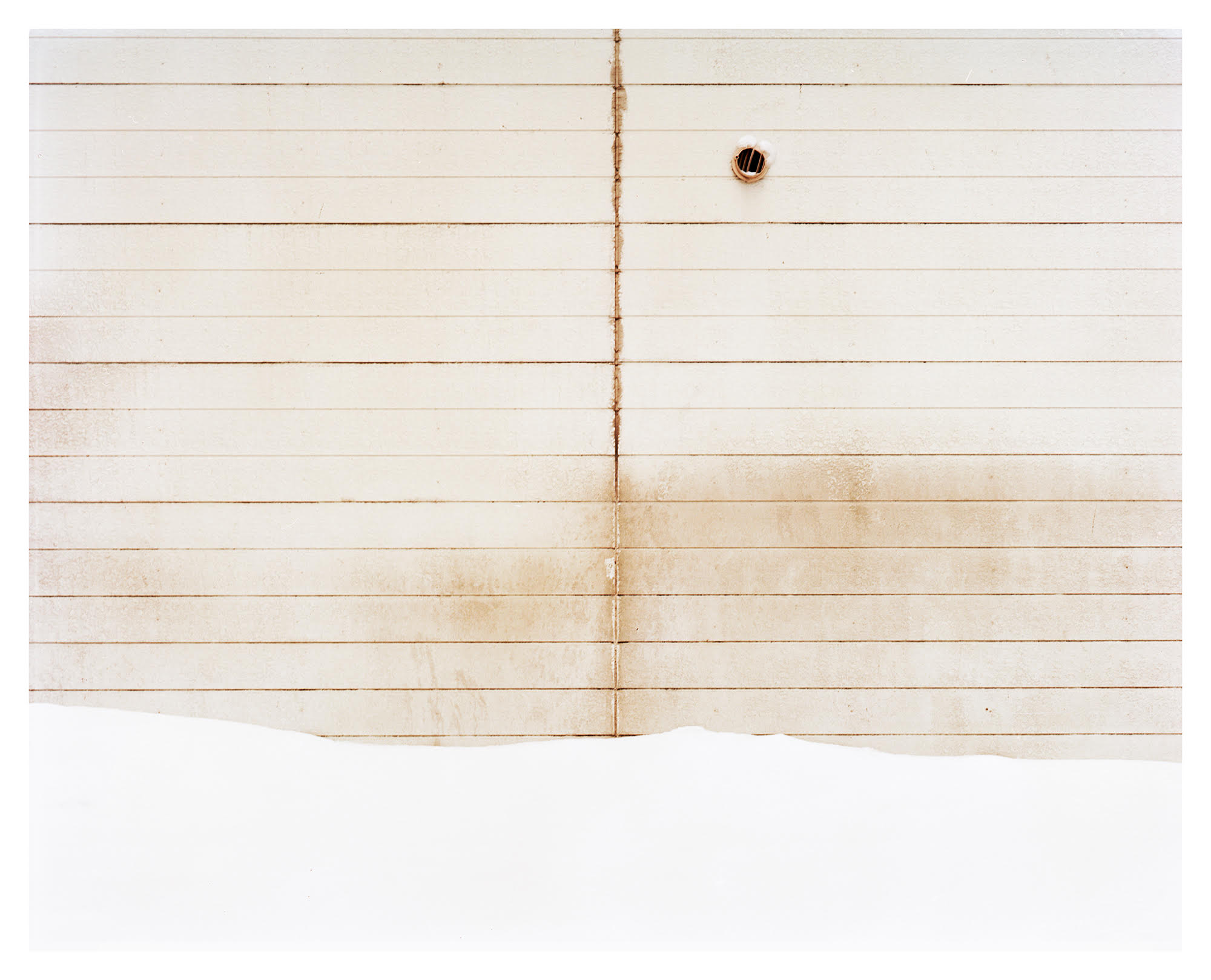 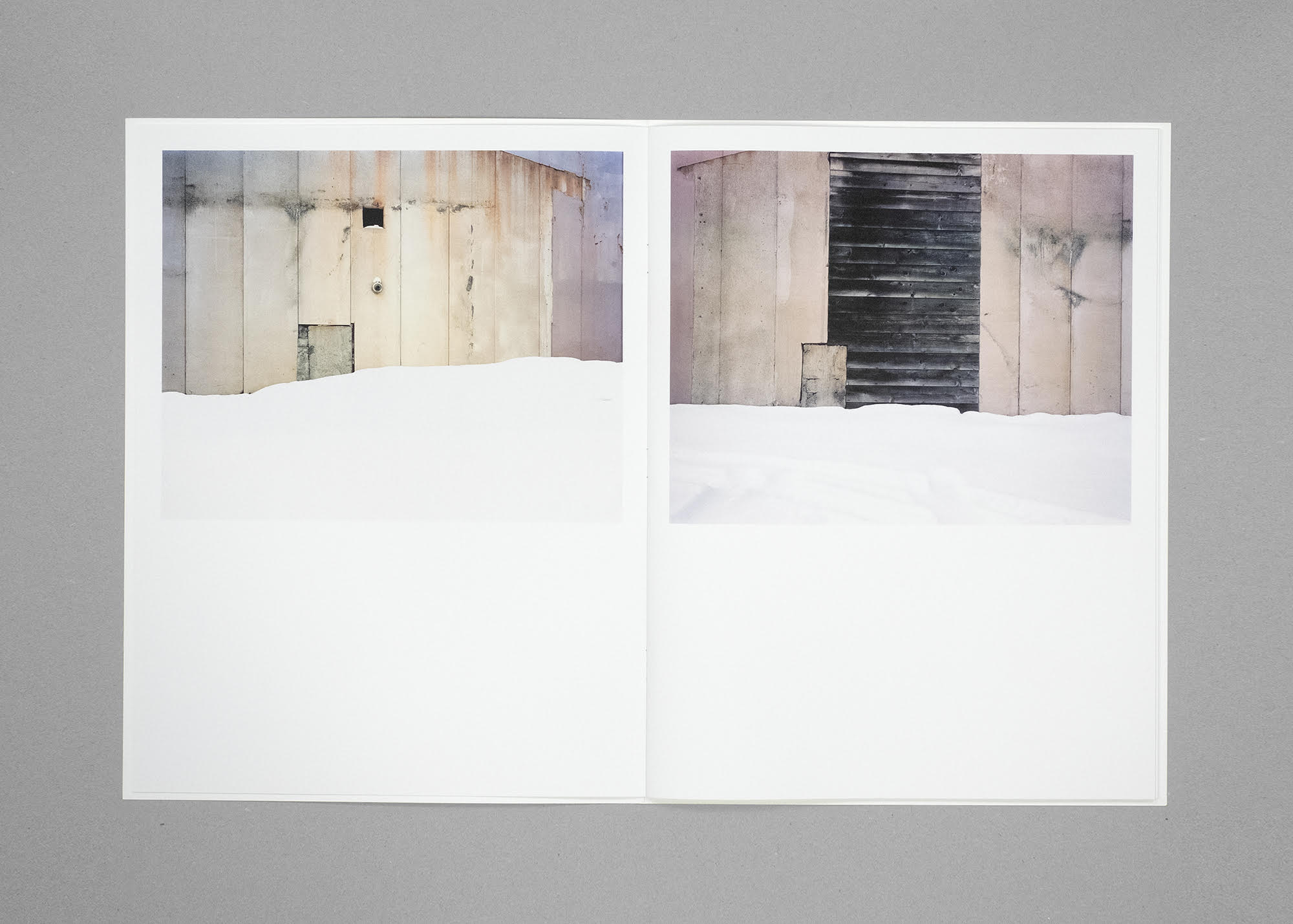 Moving through the book, some interesting pairing becomes apparent. The photographs Susukino #4 & Susukino #3 seem like somewhat obvious images to place next to each other in a sequence. They are closely matched in colour, they both feature a small timber door, or hatch, or repair. I can’t quite tell which. It’s only with time that I notice the roof line, or lack there-of.

In both photographs, chipped away against the old painted facade is a masked out line of where a roof once stood. It feels residential, making me question occupancy and consider the ramifications of the timber boarding. Were these once doorways leading into another section of a home? Or a garage of sorts? Standing side by side, these observations and resulting questions become compounded. I have to wonder, is this a common fate?

It’s in these details that the themes of longevity and building parameters become clear. I can’t help but form stories in my mind about some kind of a structural past, leading to assumptions of their future. 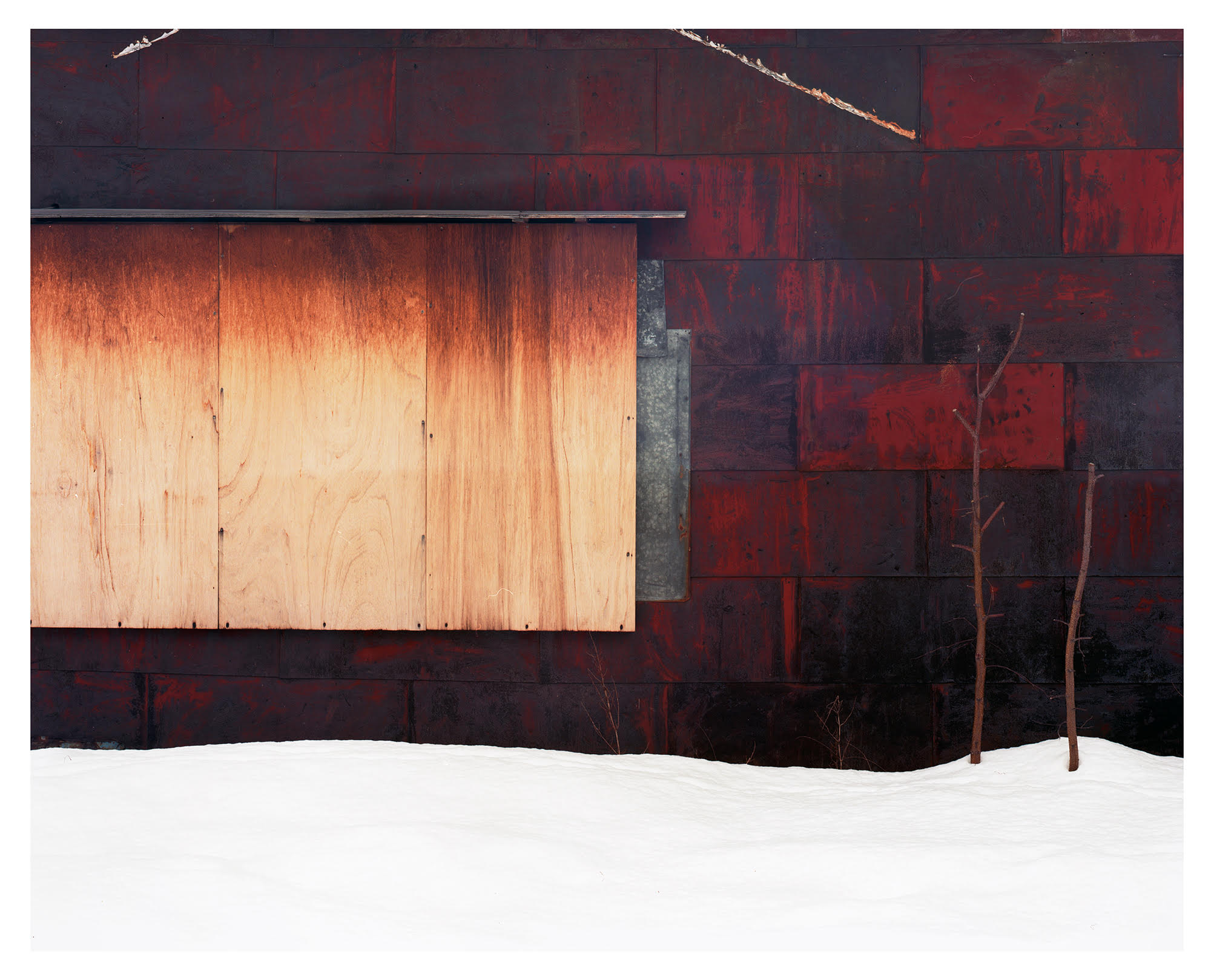 The following image, Susukino #2, is a very different photograph. Pastel beige has been replaced by a deep, almost ominous red. Timber possibly-once-doorways replaced by a tiny slither of metal sheeting poking out from behind a boarded up window. Subtle tyre marks in the snow replaced by two small trees so stark and pruned that it is hard to know if they will ever return to bloom.

It is around this point in the book where a sense of scale and liveability begins to show itself. A hand railing partially buried, a door handle just appearing above the built up snow. Electrical wires skirting barred industrial windows. These details slowly furthering context. 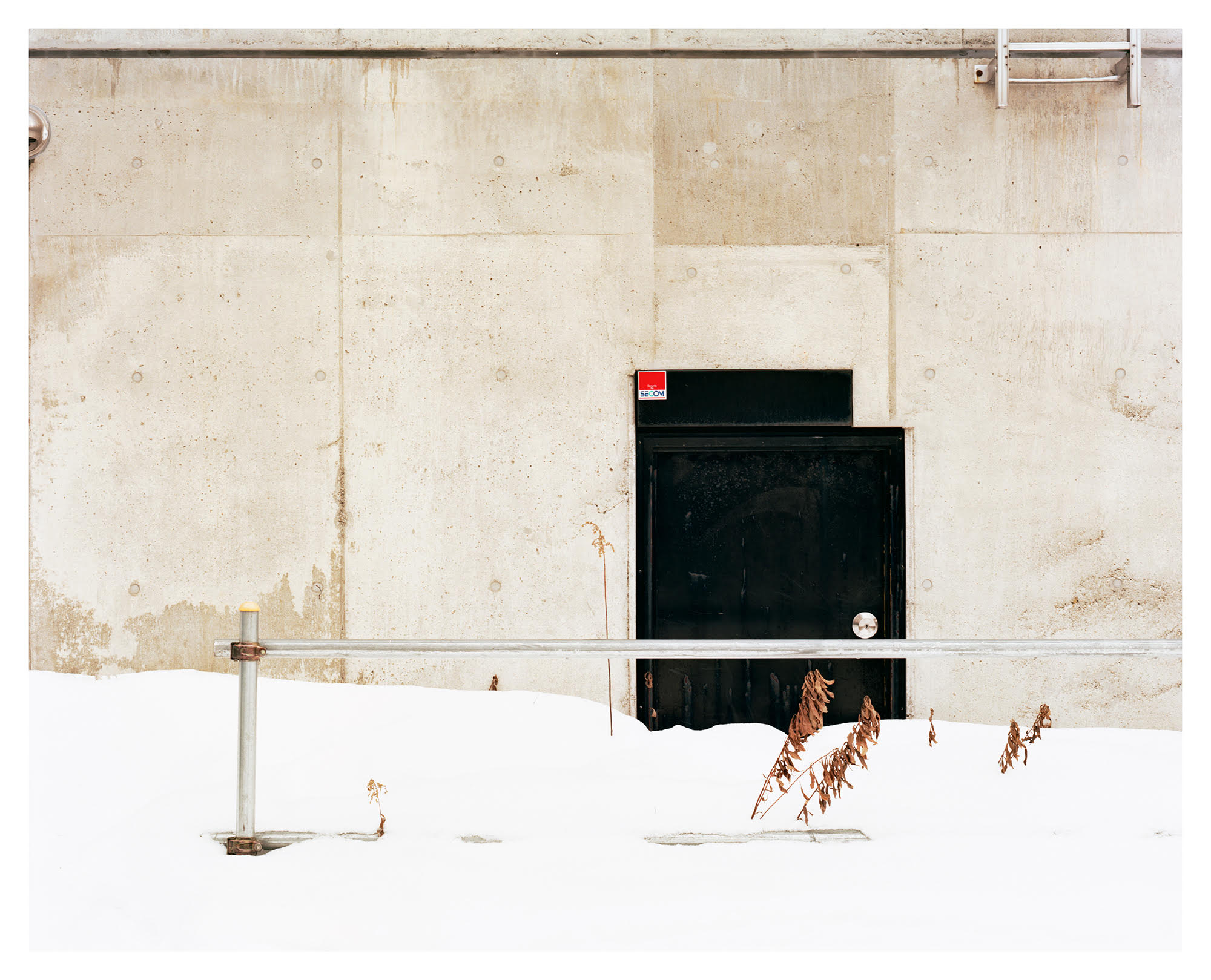 The North Eastern Estates reads like a gallery show. Highly curated, lots of white space. Big prints. It feels like one of those exhibitions that you walk through slowly at first, before crossing the room to do it again in a different order. And then again. The longer you stand there, the more nuance is revealed. Unlike an exhibition however, in which you generally get just a single viewing, this is an object that you can return to week after week. Like any book, this completely changes the possibilities for interpretation, with each returning visit illuminating a detail that you hadn’t yet noticed. Right now, after two years of cancelled events and extended time spent within our own homes, this feels especially relevant. 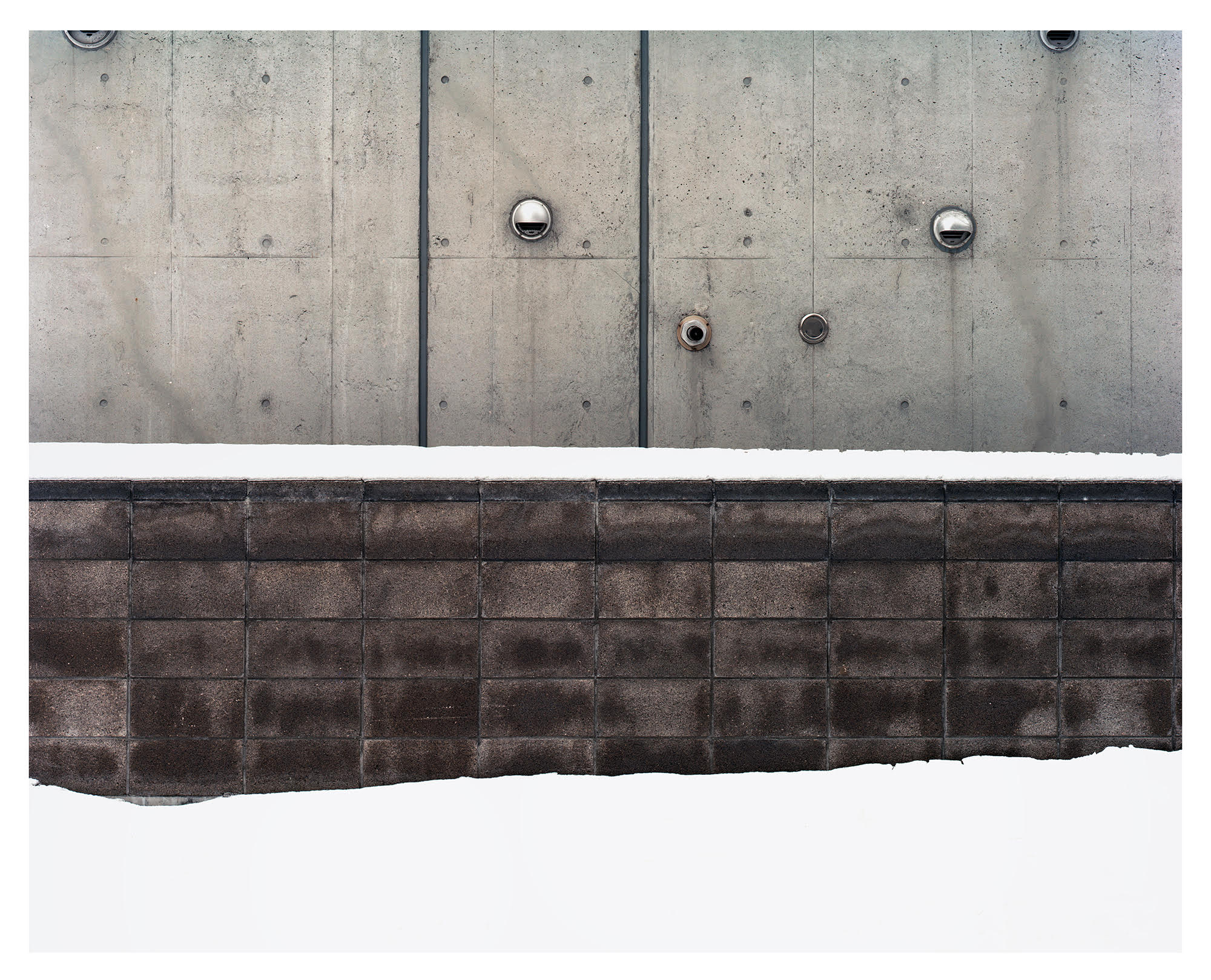 What I love most about this book is the entire world that you can internally build upon each photograph. Pasts and futures, surroundings and details, all expanding imaginatively from the facts presented within each image. I’ve never spent much time in places that receive high-level snowfall, however through this work I get a sense for the confinement and bluntness within the structural realities of existing in such a place. Through its restraint and aesthetic uniformity, I’ve found The North Eastern Estates to be a lesson in slow absorption. It leaves me wondering, as Japan nestles into another winter, how do these buildings look today? What stories would their new scars tell? A question of longevity.