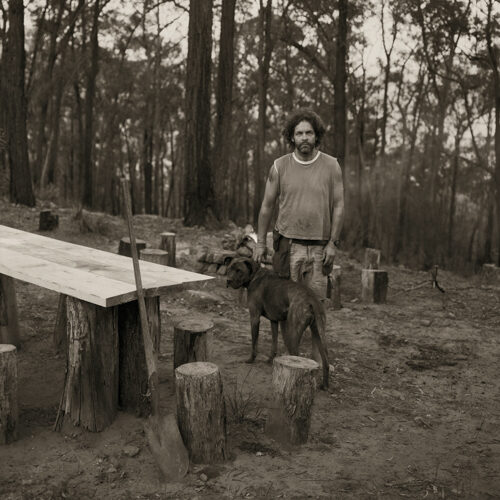 In 1992, the year after completing his studies, Kenne had a solo show at the Museum of Modern Art in Borås, Sweden [On The Side Of I], and published his first monograph – On The Side [Tidens Förlag, Sweden, 1992]. An exhibition of this work toured regional art galleries over a two year period.

Soon after Kenne embarked on several journeys around the globe.
The culmination was a two and a half years around the world trip on motorcycle between 1994-1996, resulting in his second monograph – Chasing Summer. [Bird Press, 2004]. Paul Theroux wrote the foreword.

That body of work led him to become a regular contributor to Colors Magazine for several years under the editors Oliver Chanarin/Adam Broomberg and Stefan Ruiz.

In 2005 at the Cannes Lions festival, for the inaugural seminar “New Photographers – The Hottest Talent Of Tomorrow”, Kenne was selected as one of 31 photographers worldwide to be exhibited and discussed. That exhibition later toured.

His work has been exhibited in countries including England, Croatia, France, Brasil, France, Spain, Sweden, Finland, Italy, USA and Australia.

Kenne is recipient of several Fellowship Grants from the Arts Council of Sweden.

In 2009 he won the National Photographic Portrait Prize at the National Portrait Gallery in Canberra, Australia, with a photograph of his sons Cormac and Callum. He has now been selected seven times, since its inauguration in 2008.
He was runner up in the prestigious Moran Photographic Prize in 2009 – at the time the world’s richest photographic prize.

In 2012 Kenne’s solo show CITIZEN opened at the National Portrait Gallery in conjunction with a book launch - CITIZEN is his third portrait monograph. [Au.thentic Press, 2012] The exhibition has subsequently toured five capital cities in Australia.

Kenne’s fourth monograph was released in 2015 - The Hedgehog And The Foxes [ P PRESS].

His fifth book: The Ball was published in late 2018 by Journal, Sweden and launched During Paris Photo.

In 2020 three of his portraits (out of a total of 54) was selected for the Taylor Wessing Portrait Prize at The National Portrait Gallery in London.

He lives and works in Sydney, Australia.
In-Depth